Russian Strategic Nuclear Forces is reporting that it may be an interesting week for the naval leg of the Russian strategic nuclear triad:


A RIA Novosti report quoted an unnamed representative of the military that the Russian Navy is planning to conduct SLBM launches in the Pacific, most likely on September 15th (although the launch window would last until September 20th). The missiles will be launched from submarines deployed in the Sea of Okhotsk and the Bering Sea.

What's interesting, the missiles will be launched to the Kura test range in Kamchatka and not to the usual Chizha test site at the Kanin Peninsula. This means that the missiles would be tested at an unusually short range (this would require a lofted trajectory) - no more than about 1500-1700 km and maybe as short as 600 km. The purpose of these tests is not entirely clear at this point (although I'm sure we'll hear obligatory references to missile defense).

Another launch that we should expect next week is the long-awaited flight test of the Bulava missile. It's about time - the Dmitri Donskoy submarine recently returned from sea trials and presumably is ready for action. Also, I have some information that the test is indeed scheduled for some time next week.

This is going to be an interesting week to watch for Russian SLBMs. Stay tuned.

A couple of questions immediately spring to my mind:

1) Did the Russians deploy on a temporary basis a Delta IV to the Pac? If they have, I haven't seen the slightest indication of it.

2) Is the short, lofted trajectory intended to be a response to Polish acceptance of the missile defense system on it's soil? A cursory examination of Google Earth reveals that the distance from the White Sea to Redzikowo, Poland, site of the future interceptor base is, wait for it, 1600km. Conincidence? 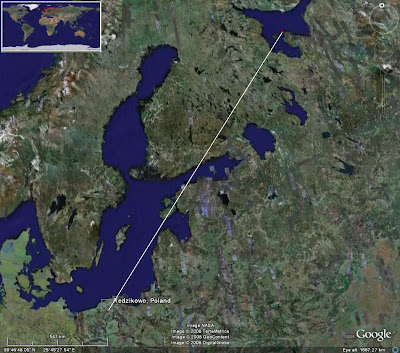 3) Are there going to be multiple launches, a short range launch from the Delta IV in the Pac and a long range test from the Dmitriy Donskoy from the White Sea?

4) Or is this just typical civilian journalist attention to detail on military matters?

I guess we'll have some answers by next week...
Posted by Russian Navy Blog at 11:45 AM

Here is a link that provides details of the flight path of at least one (if not the only) missile: Sea of Okhotsk to Klyuchi: http://severdv.ru/news/show/?id=14878.

Can you provide the link to your source that indicates a Bulava launch will occur next week?

russiannavyblog said...
This comment has been removed by a blog administrator.
September 13, 2008 at 6:10 PM

As for the Bulava test, you'll have to ask the proprietor of Russian Strategic Forces. The blockquoted portion of my post is actually his post in its entirety and he says:

Another launch that we should expect next week is the long-awaited flight test of the Bulava missile. It's about time - the Dmitri Donskoy submarine recently returned from sea trials and presumably is ready for action. Also, I have some information that the test is indeed scheduled for some time next week.

Isn't targeting a missile defense interceptor base with nuclear ballistic missile not a bit...overkill?

I mean, the BMD has a defensive mission. Russia has plenty of ballistic missiles to overwhelm the 10 BMD missiles. It has nothing to fear from it unless its planning to strike. Using (nuclear capable) ballistic missiles to send a msg against BMD...is irrational and overkill. It's like advocating against gun control and to drive your point home go out into the street and start shooting in the air randomly.

God those Russians are annoying me.