On Tuesday, 30 March, the Russian Navy begins deploying forces to carry out largest exercises on the world ocean in recent years. The exercises began with the departure of the heavy nuclear missile cruiser Petr Velikiy from Severomorsk...The cruiser will pass through the Atlantic, Mediterranean and the Suez Canal and enter the Indian Ocean. Ships from the Baltic, Northern, Pacific Fleets as well as Naval Aviation will act in support.

This video from Zvezda News notes that one goal of this deployment is to train the crew, fifty (50) percent of whom are new conscripts. The reporter notes that this is a bit of a risk, but on the other hand the experience will allow the conscripts to master their tasks quicker. The Captain of the Petr Velikiy, Feliks Menkov claims that "Not one man wouldn't want to go on this deployment. People who wouldn't want to go to sea need to serve on another ship. And if they don't know how to do their jobs, we'll teach them." The electrical department head, Vitaliy Khadzhi adds, "It'll be tough, but we'll try..." The Petr Velikiy will pass through the Atlantic, Mediterranean, Indian and Pacific Oceans in the first two months. She got a completely new paint job. The commander of the Northern Fleet concludes with remarks about how interesting the exercise will be, as well as how interesting the port calls and exercises with "probable partners" will be as well. The next land the crew of the Petr Velikiy will see will be Gibraltar.

And in other dino-cruiser news, any idea why the Admiral Ushakov has apparently changed it's name back to Kirov? 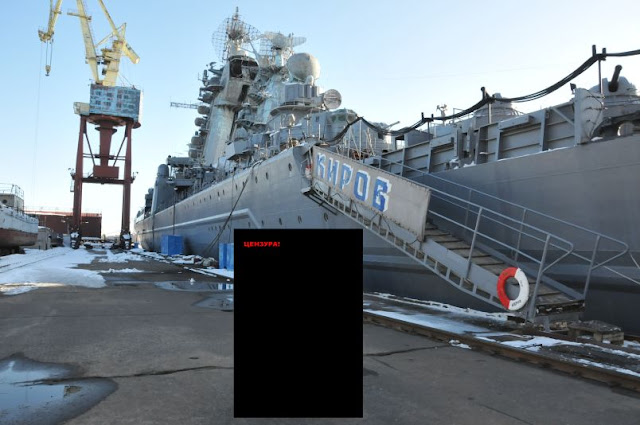 I can only assume that they're turning the Kirov into a museum ship?

Apparently there is still some confusion on its official status. Its name varies even in official documents. I guess the crew doesn't bother to change the sign on the gangway. The ship's status is in limbo anyway.