Soviet Naval Disaster of the Day - Severomorsk is Nearly Obliterated, 17 May 1984 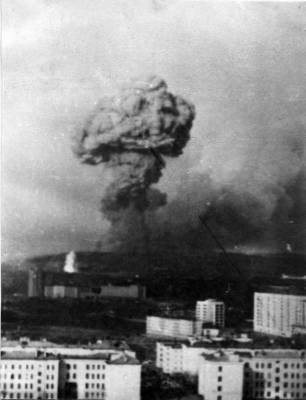 This event is never mentioned in print. What is being refered to is the explosion at Okol'naya - the main ammunition storage base for the Northern Fleet. Back then, because of a sailor's cigarette butt, almost half of the fleet's supply of strategic missiles, torpedoes and mines were destroyed in the course of an hour and a half. It was at the end of the work day. Missiles flew above the bay in corkscrew trajectories. One after another, and another...The air was full of howls, crashes, thunder and explosions. In the city as well as on the ships at their moorings in Severomorsk, it was immediately understood - Okol'naya was the source of the fireworks, its granite walls rising just a kilometer from a neighborhood and a few hundred meters from the ships of the 7th Squadron. There were two nuclear submarines acutally tied up at Okol'naya. The "fireworks display" grew. Several mindless missiles corkscrewed into the sky, flying in the direction of the town and the ships. Soon a giant cone of black fire spread in the sky. It slowly rose into the sky, taking on a mushroom form, leading to alarm in the population of the town. 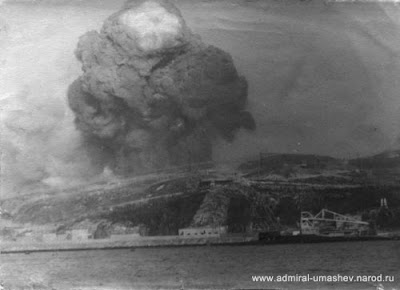 Women ran into the streets with children in their arms, many only half dressed in house coats and slippers, the men running henny-penny with them, certain of them in uniform, giving the scene a weird drama. People ran up the stairs that lead up the slopes of the hills. Someone fell, he was picked up and dragged. Cars jammed the routes out of town. The cars were packed, but despite this they stopped to pick up children which their mothers literally threw into the arms of strangers. Screams, cries, curses - all drowned out by the thunder and howl from the volcano that was Mount Okol'naya. Black with an orange-purple mushroom top, growing to its full height in an instant, nodding toward the town, but afterwards it began to slowly settle in the direction of the tundra and the ocean.

There were casualties. I can confidently talk about two brave people - an officer attempting to extinguish the flames and a sailor staying behind to man his post in a burning storage building. The prevailing wind was in the direction of the town - hundreds, maybe thousands were poisoned by the fallout (the authorities prepared for the evacuation of neighboring Murmansk). A catastrophic ending could have occured with a bombardment by ships with nuclear reactors and full charges in their missile launchers.

This is just a snapshot. Not one town or village would want to live through this. But, judging by all the military units that have had such explosions and fires, even at the sites most suceptible to explosions, it hasn't been foresworn.

Atually this was due to Fatima - a few months before, Pope John Paul II has consecrated Russia to the Immaculate Heart of Mary. Then on May 13, 1984 (feast day of Our Lady of Fatima) a fire began in Severomorsk that led to the explosion.

ray ban 3186 are usually smooth. they're made having a streamlined look. one more pattern may be the wraparound Ray ban sunglasses.They are pretty well-liked amidst sports activities personalities generally because of its futuristic appeal. These wraparound ray ban 3212 typically have polycarbonate lens and sturdy grip to produce total vision security accompanied using the awesome and classy look. dfgkcxy0rtw The display is immensely common and has led towards the generation of the really personal manufacturer title ray ban 3269 , amongst other products and solutions which include a movie game.All Ray ban sunglasses lens are created of shatter evidence polycarbonate and offer 100% ultra violet protection. So, even as you have older,
ray ban 3322 you can even now ride the street with obvious and sharp vision.Every pair of genuine Orange County Ray ban sunglasses arrives with it's personal leather-based bound case. several huge and well-liked custom homes on a regular basis roll-out their ray ban 3359 ranges that are prepared with exceptional vision gear, ideal acuity, and assortment of features.