Or, more properly, back from the dead: 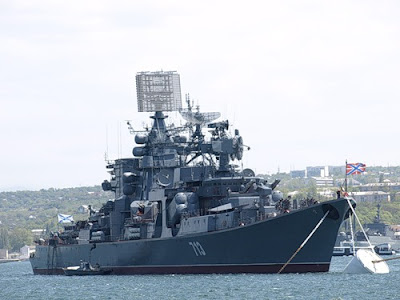 From the official mil.ru:

The large anti-submarine ship Kerch left port on the eve of Surface Sailor's Day for sea trials. The main task before the crew was testing the engines and maneuverability of the ship.

For now the ship has undergone a significant crew turnover: long-serving seamen have been transfered to the reserves and young sailors have replaced them. The conscripts from the spring 2008 intake have already been assigned and are standing duties and watches on board. Their first trial at sea will show how well prepared they are and how well they have mastered their specialties. Therefore the most important task will be adapting the young crew to life at sea which is the first time at sea for many of them.

Blogger U-96 wonders if the increased op-tempo has led to the "reanimation" of the Kerch, while some of his commenters wonder why the Kerch was restored while the Azov, with the better area defense system (SA-N-6), was cut into razor blades.