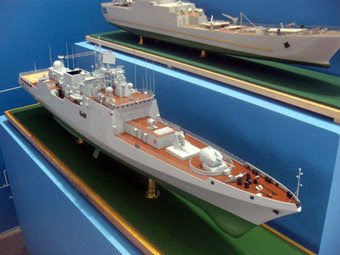 Is this a model of the new Gorshkov frigate? Source: The Sea is Everything

The Fleet Admiral Sergey Gorshkov, the lead ship in a new class of frigates should be in the water in 2011 according to RIA Novosti. This was announced by Vice Premier Sergey Ivanov at the Severnaya Verf' shipyard during a military-industrial conference in St. Petersburg on 30 October, where the frigate is being constructed.

Construction began in 2006. The Gorshkov is the first large surgace combatant laid down in a Russian yard in 15 years, therefore she is tied to a revival of Russian naval ship construction. The initial construction of the frigate should be done in 2009, however the target for the completion of construction has been pushed back for an unknown reason.

The exact combat characteristics of the Gorshkov have not been revealed. For now it is known that the displacement in 4,500 tons. The frigate will carry armament consisting of eight anti-ship missiles, a 130mm gun, an ASW missile system and a medium range SAM. There will also be a helo.

The approximate cost will be around 400 million dollars. It is planned that 20 of these frigates will be built in the next 15-20 years.
Posted by Russian Navy Blog at 6:16 PM

"Is this a model of the new Gorshkov frigate?"

Maybe the Russians are going for a Russian AEGIS system. Notice the 4 phased arrays on the mast in the above graphic, which may or may not be the picture in the blog post. It would make sense, most modern navies are switching to some sort of integrated system using phased arrays.

These articles are fantastic; the information you show us is interesting for everybody and is really good written. It’s just great!! Do you want to know something more? Read it...: Great investment opportunity in Costa Rica Cheap Land for Sale

Thanks for sharing this, it's pretty interesting to know. My brother who likes to get Generic Viagra told me about it.