Carriers - What Good Are They Anyway? 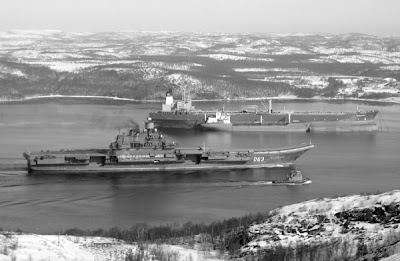 Published in the Independent Military Review 20th May, 2008:

Strategic Projection: The Admirals will allocate money to build carriers, but where are they going to get the ship building capacity?


Oleg Leonidovich Sergeyev is a Technical Sciences PhD and a Colonel.

On the eve of the May holidays, the Commander in Chief of the Navy Vladimir Vysotsky elaborated on the prospective development of the national fleet. Special attention was given to the plans to construct 5-6 aircraft carriers by the middle of the century, but not as individual ships with carrier aviation, but as systems as part of a multi-purpose task group and strike formation. There will be 5-6 such systems in the Pacific and Northern Fleets. The construction of the aircraft carriers must begin in the 2012-2013 time frame.

The ambitious plans to develop the Navy are based on the concept of the deterring a potential enemy – the USA - in the littoral zone under the cover of anti-missile and anti-aircraft systems and periodic build up of naval presence in regions of strategic interest to Russia. So as to cover the sea with aircraft carriers, driving poachers from their shores, is completely wasteful from an economic point of view. But there isn’t any easily defined operational doctrine explaining the necessity of such ships and none is foreseen for now. Today, that’s why the only Russian aircraft carrier “Admiral Kuznetsov” spends a month or two in the Atlantic once a year, just showing the flag and the ambitions of the high command, absent any easily definable task.

By the way, the US naval strategy is now under the influence of a new threat – high tech terrorism, the proliferation of weapons of mass destruction, piracy – this is a serious change from when the priority was the deter the USSR and Russia aspired to control over the world ocean with the participation of not less than thousands of ships in the international fleet.

The very name “carrier strike group” says that aircraft carriers are offensive weapons systems, acting far from home shores. But Russia has no pretensions to mastery of distant waters, she has enough of her own territory to spare. A clear answer as to why she needs aircraft carriers has as of yet not been received from the admirals and politicians.

The airwing is the key element of the carrier strike groups, determining the composition and specification of the combat employment of a given formation of ships and the allocation of infrastructure, scientific-technical and production centers focused on the realization of the “life cycle” of the sea-based aviation weapons systems. Complicating the military ship construction policies without a system of organization of efforts to modernize weapons usually leads to economic losses. It was in this way in the Khrushchev Era that half finished artillery ships and shore based aircraft went straight to the scrap pile.

The service life of an aircraft carrier with planned maintenance between deployments is about 30 years or more, and the construction tempo (assuming financing) determines the number of graving docks. The realistic service life and corresponding number of these ships in service with the USSR and Russia was determined by the lack of repair facilities and the neglect of the production base. For this reason the first ships were authorized to be repaired in the Nikolayev shipyard, and further reconstruction in shipyards in the Northern and Pacific theaters. The fruition of these plans were not in the cards and the heavy aircraft carrying cruisers of the Pacific Fleet were stricken and sold for scrap before their time – earlier than the 20 year service life – in the middle of the 90s.

Seven to ten years are needed in order to introduce the specialized production ability in order do repairs and modernization of the aircraft carrier and all of its systems in a quality manner. For now it isn’t obvious that the new chairman of the council of directors of the Unified Shipbuilding Company, Igor’ Sechin, will be able to resolve this issue.

Not having resolved this task, even if there were dock space in the north and east of Russia in 2012-2013, three aircraft carriers with be withdrawn from service in the fleet by the middle of the 21st century – two “new” construction and the only one that is active today – the TAVKR “Admiral Kuznetsov”. Accordingly, Russia should start building in this period up to 10 aircraft carriers, whose average time of construction is 8 years, based on the production rate at the Black Sea Nikolayev shipyard and based on the cooperation of hundreds of subcontractors all over the USSR. To this number it is also necessary to add dozens of ships that make up the carrier strike groups.

Can the aircraft carrier fleet become a breakthrough project or is it the latest in a series of conceptual soap bubbles, far from realization? One can divine the answer to that this way – by technical cooperation of national production, outsourcing potential to the countries of the Commonwealth of Independent States, most of all, Ukraine and by widespread use of management by objective. On the other hand, the mark of failure will be the creation of new Directorates – in their number per capita we are well ahead of the rest of the planet.
Posted by Russian Navy Blog at 9:55 PM