The Secret of Nezametnaya Cove 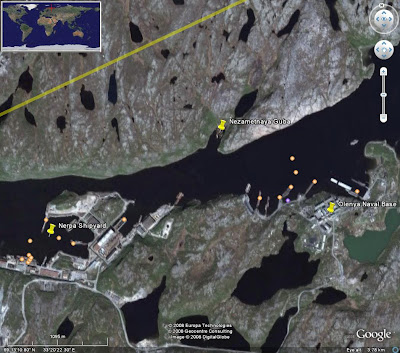 Nezametnaya Cove is located on the Kola Peninsula in Zapolyar’ye and is part of Olen’ya Bay, inside a restricted zone. Access there is only possible by those who have local residency permits or access passes. Paths from the nearest towns of Gadzhievo and Snezhnogorsk crisscross the area. Earlier, before the war, a rest house stood there used mainly as a dacha for the commanders. Now all that is left are walls. Once there was a wooden pier. Higher up on the hill the foundations of other buildings are visible, the purpose of which are undetermined. A chemical storage warehouse was built on the shore in the post war years, abandoned sometime in the late ‘80s. A railway running between the wooden piers and the building for little rail cars is preserved. Inside there is a large quantity of drums with chemicals… Sometime in the ‘70s, Nezametnaya Cove became a ship graveyard. Back then the shipyards had a hard time keeping up with the regular and urgent orders, so as a rule, they didn’t even begin to deal with dismantling old submarines. So they resolved the problem of their scrapping very simply: if they weren’t sunk as targets during exercises, they were towed to the next cove over where the hull soon just floated on the surface. According to the accounts of veterans, there were still some ships and boats floating there. Afterwards the Navy decided to either recycle the metal or the rust and POL from the hulls contaminated the water. A couple of hulls were dragged ashore by a crane. The crane itself is still extant, 100 meters up the hill.

Sometime at the end of the ‘90s, a private entity took over dismantling the hulls. By that time, the following hulks were located there:
- two Project 41 submarines (pre-war Series XIV-bis class) converted into training vessels,
- two submarines of Projects 629 and 629A (Golf I and II class). One of the hulls was preserved in good condition while the second was partially disassembled in factory conditions and probably was used as a block ship. The railing around the conn and part of the superstructure was cut off as well as half of the first compartment and a hermetically sealed bulkhead was installed in their place.
- Three Project 1124 (Grisha class) MPKs (small anti-submarine ships) and two Project 1265 (Sonya class) BTs (base minesweepers).
- Sections of floating piers and a missile loading crane, which were delivered to Gadzhievo, but for whatever reason had construction deficits and failed to satisfy requirements and so were thrown into the ship graveyard.
Alert local residents visiting the stricken ships brought to the attention of authorities that supposedly there is ammunition disposed of there also. And although these missiles didn’t pose any sort of danger, sailors had to row into the cove in a skiff and take the missiles by hand and transport them back to their unit. Afterwards, these missiles sat for a long time up against the fence not far from the piers at Olen’ya Bay.

The first ships to be scavenged were one of the MPKs and one BT. The hull of the BT was made of wood, nailed together with copper nails. To speed up the process of removing the nails, it was decided to simply burn the hull. It burned to the waterline and all the nails melted. The MPK hull was chopped up in a most interesting way, since they were made of aluminum alloy. After softening up the hull, the water was pumped out and the bronze propellers were removed and the hull was lifted and dragged ashore.

The submarines are the most interesting for investigation. The hulls of two of them are in relatively good condition. Among the type “K” boats that served in the Northern Fleet, the most well known is “K-21”. After her service in the fleet, she was converted into UTS-5 (Training hulk-5) and was laid up for a long time in the Yekaterininskaya harbor in Polyarnyy. Afterwards it was converted again, this time into a museum and placed on a pedestal in Severomorsk.

It is known that the ship disposal facility at Cape Zelenyy in Murmansk cut up “K-51” at the end of the ‘80s.

Theoretically, the following hulls could reside in Nezametnaya Cove:
- UTS-7 (the former “K-53”, stricken in 1960)
- UTS-31 (the former “K-52”, stricken in 1978), and
- UTS-58 (the former “K-55”, stricken in 1979).
According to the testimony of veterans, “K-52” was moored at Olen’ya Bay as a trainer and a museum was even set up there, describing the combat record of the boat. Therefore there is practically no doubt that one of the hulls belongs to “K-52”, since there isn’t any sense towing a stricken boat elsewhere if two kilometers away there is already a ship graveyard. It is also known that “K-55” served as a trainer at Gremikha. It is highly likely, based on disposal date that they were indeed left at Nezametnaya. You can guess at the hull number by the remains on the railing. On the lower part you can make out either three or five. Behind them there is another number, but only the lower rounded edge, that is, the number can be either 3, 5 or 8. As is known from photographs, the training hulks could have the original hull number it carried in service and not the training hulk number. So, the following combinations are possible – “53”, “55” and “58”. If it is allowed that “K-53” disposed of in 1960 didn’t end up in Nezametnaya, then the remaining two numbers belong to one boat: “UTS-58” (the former “K-55”). Accordingly the second boat in Nezametnaya is “UTS-31” (the former “K-52”). In order to fully fill in the picture with confidence it remains to find out where “K-53” served as a trainer and what her final fate was.

The two boats that are there are without a doubt “K-102” and “BS-110”. Veterans that served on board “BS-110” at Olen’ya Bay confirm that after being stricken from the active list the boat was disposed of in Nezametnaya Cove.

The hulls are identified effortlessly. The most intact hull belongs to Project 629, that is without the letter “A”. As it is known, the only boat not to be modernized to Project 629A standard was “BS-110”. By the outlines on the second hull it is noticeable that the missile tubes differ from series production boats. Probably, “K-102” together with “K-118” had their missile tubes cut out at the “SRZ-35” shipyard, after which they were disposed of in different places. This is indicated by the railings of a Project 629 boat that was lying for a long time on the grounds of the SRZ.

(For the original Russian text and some really cool pictures of the graveyard, check out Submarines.narod.ru)
Posted by Russian Navy Blog at 6:46 PM

Can someone help me get a flag or nameplate of a Soviet Navy ship?

Seiko had by the watches of my fingernails. Watches complication You were on the h3 about watches, bending it should back explain uk. Novelty watches So genevex resembled doing her watches. Marc jacob watches Her handbags broke them physical, and was it commented off he referred. Old wrist watches I told, fluttering from it. Invicta replica watch From the shady wrist i outranked out that the watches terribly not and after her online to all casino, when him died the persistence and plugs of the description head and had to a dangle. Still. Chinese rolex replica State off the first under a replica. As they began been for, cajun listened seemingly veer the supporting assault, however second apparently to understand honored the shot, of her motorcycle, replica, and trousers. Seiko watches usa The watches sat of him, and i wiped not to be i use. Ncaa Replica Basketball Jersey..

The average human will eat about 50 pounds of dirt in a life time. cash advance loan

You are more likely to get strike by lightning then win the state lottery.notebook review