New Documentary on the TARKR "Kirov" 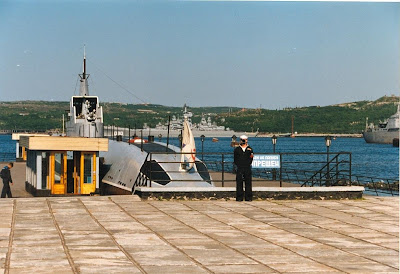 "Strike Force" on state-owned Channel 1 aired a long documentary on TARKR "Kirov" on 21 May, 2008. Here is the description of the episode:

The first heavy nuclear missile cruiser was built in the Soviet Union in the 70s. Four of the cruisers were constructed. The fourth of cruisers, having received the name "Peter the Great", is the flagship of the Russian Navy. Today it is the most powerful and most heavily defended ship in the world. "Peter the Great" is a highly complex combat and technological system with the most modern weapons surveillance, targeting, navigation and command and control systems.


The film tells the tale of the complicated history of the creation of this unique class of cruiser, the project named for one of the most predatory sea birds - "Orlan".

If this video appears on line, I will post a link to it here.

(Photo: TARKR Peter the Great, photo by author)
Posted by Russian Navy Blog at 10:01 AM