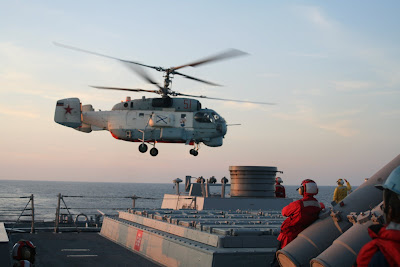 Plans by the Navy Main HQ Staff calls for further participation by ships of the Pacific Fleet in international exercises, aimed at strengthening stability and mutual trust in the Asia-Pacific region. Thus, the large anti-submarine ship of the Pac Fleet "Admiral Pantaleyev" will take part in the annual quadrilateral international exercise "FRUKUS-2008 " in August, which will become one of the main international maritime cooperative events.
According to "Red Star", the exercises will take place in the Sea of Japan littoral. American, British and French ships will participate. The goal of the exercises will be to prepare for international maritime peacekeeping operations.
Photo: Author's photo, FRUKUS-2007
Posted by Russian Navy Blog at 5:10 PM