A Sevastopol' Port Call for "Dallas" 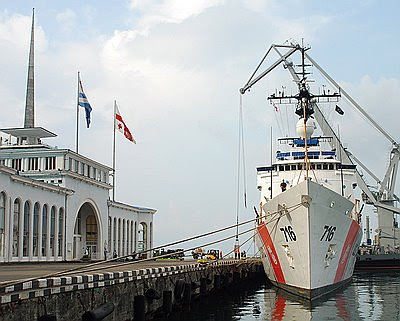 Kiev, 30 August (Novyy Region, Mikhail Ryabov) - The United States Coast Guard ship "Dallas" plans to make a working port visit to Sevastopol' on 01 September at 0800 at the invitation of the Ukrainian government. As opposed to the reception given the Russian training vessel "Perekop", which was refused a worthy mooring spot in the hero-city, the American Coast Guard ship will be offered the best place - a spot in the sea port.

It is remarkable that the US Coast Guard ship "Dallas", which has been in the Black Sea since 24 August, will visit Sevastopol' after completing her "humanitarian" mission in the Georgian port of Batumi. Astonished journalists observing the American activity evoked the secretness of the unloading operation of the "humanitarian" cargo, which took place at night at a specially cordoned off space, guarded by service memebers during the "humanitarian mission". The answer to questions about the cargo was straightforwardly simple - "water for wounded Georgian soldiers". Taking into account how quickly the combat readiness of the Georgian Army is being recovered, one can come to the conclusion that the Americans are not only providing water to the "unfortunate" Georgians, but also something that needs to be supplied in secret and guarded.

The choice of 01 September for inviting the "dear" guests wasn't chosen accidently. Knowing the mood of Crimeans and residents Sevastopol' with regard to NATO, they hope that residents of the city can't turn out expressing Russian glory and that they wont turn out in full strength because of "Knowledge Day", the day when parents send their kids to school and workers have to go to work.

Any thoughts on using the Coast Guard for this kind of detail? During wartime the CG has been absorbed into the Navy, but otherwise have they usually been involved with anything like brinkmanship?

I don't know, honestly. I do know that the Coast Guard has been used a lot the last few years for foreign port calls, including on the Russian Pacific Coast and in the Black Sea, but as far as using them for brinksmanship?

I think its worth noting that the paper that this was taken from has a pretty mixed record for accuracy (i.e. its pretty yellow).

Good for people to know.