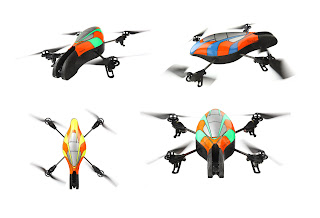 And a Spetsnaz reconnaissance drone? 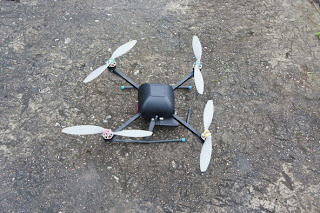 Posted by Russian Navy Blog at 6:50 PM No comments: 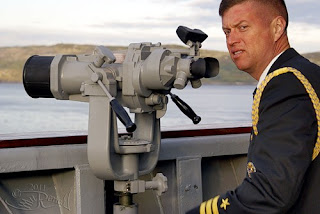 "What the hell are you looking at?" "More pictures of the USS Carr's visit to Murmansk on 02 September, sir!"
Posted by Russian Navy Blog at 6:36 PM No comments:

The submarine launched ballistic missile experimental design (OKR) "Layner". Developed by the Makeyev Design Bureau (was SKB-385, Miass). The development of the OKR Layner theme was begun after a decision by the Ministry of Defense and the Military-Industrial Complex in 2008. The design phase of the project was probably prepared in the middle of 2009 and in June 2009 there was a designers conference in which the work schedule was approved.
Vibration testing of the 1Eh1.50.00.000 OKR Layner mock-up was undertaken. The first launch of the flight testing program occurred on 20 May 2011 from Delta IV class K-84 "Ekaterinburg" (Program number 380) from the Barents Sea to the Kura Test Range on Kamchatka. The launch was successful. As a result of these tests, an interagency commission adopted the design and technical documentation to allow serial production and employment. The second launch of the Layner occurred on 29 September 2011 from the Barents Sea with the target at the Kura Test Range on Kamchatka, the launch taking place from the Delta IV K-114 "Tula". On 06 October 2011, the mass media reported the end of the R-29RMU2.1 flight test program.
The production of the missile was ordered from the OAO "Krasnoyarsk Machine Building Factory" and has entered series production…The missile, created as part of the OKR Layner theme, is an improvement of the R-29RMU2 Sineva/RSM-54 armed with more warheads and, probably, a new guidance system. After the Delta IV SSBN is armed with the Layner SLBM, they can remain in service until 2025 or 2030. 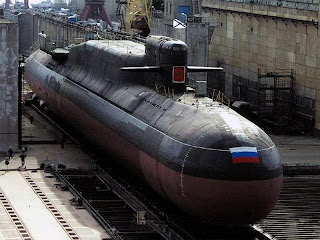 Layner test launcher, K-114 Tula in drydock, 2004.
Launch system - launchers on the Delta IV SLBM. The modernized digital computer system "Arbat-U2.1" will support the operation and combat readiness of the SSBN and it's missile.
Guidance system - Inertial autonomous guidance system, probably with astro correction.
Engines - Liquid in all stages.
Warheads -
12 low yield warheads (data not confirmed);
10 low yield warheads with ABM penetration aids;
8 low yield warheads with strengthened penetration aids;
4 medium yield warheads with penetration aids;
or, a mixture of low and medium yield warheads with and without penetration aids.
A new type of low yield re-entry vehicle was developed by the Moscow Institute of Thermal Technology together with a nuclear warhead design facility - the All-Russia Scientific Research Institute of Technical Physics (Snezhinsk) - and will equip the Topol-M, the Yars, and the Bulava. The new physics package will be employed on the R-29RMU2.1 Layner without any sort of designer modifications by using cables and adapters and also specially designed individual mounting platforms. …
Sources: Yearly Report of OAO "Makeyev Design Bureau" for 2010
Konstruktor No.16/2008, No.6/2009, No.5/2011
Lenta.ru
Maritime Strategic Missile Systems - Moscow: "Voyennyy Parad", "Makeyev Design Bureau", 2011.
Pretty much what you would expect. Not that I expected it to be something as silly as a conversion of the Sineva from a liquid fueled missile to a solid fueled missile, or that it would be launched from the sea by specially converted Narwhals and from the land from specially converted Unicorns.
Posted by Russian Navy Blog at 7:03 PM No comments: