Peter the Great Update: The Pillars of Hercules

The Peter the Great prepares for an "historic first", the entry into the Med by the Russian Navy flagship:

Gist: After traveling 6000km across the rough Atlantic, the Peter the Great prepares to enter the Med for a port call in Tripoli, Libya.

Cut to a meeting of the Navigation planning meeting where Nav Department is discussing the details of the entry into the Med through the Stratits of Gibraltar. The flag navigator explains to the rest of the navigation department how the straits are 65km long and that there are certain international rules they must follow while transiting the straits. They are not allowed to anchor out, carry out repairs or reduce speed and the task force must proceed at regular intervals in a line ahead formation. The straits are busy and 120 vessels a day proceed through the area. Unedifying interview with the navigator and commentary follows.

Cut to a shot of the crew watching a broadcast of TV Zvezda on the TV for some random reason.
Posted by Russian Navy Blog at 8:46 AM 2 comments:

Peter the Great Update: oooo rah. PtG to Enter Med by End of the Week

Marines on the Peter the Great practice for the big exercise with the Venezuelans. Port call in Libya announced.

Gist: After covering 4500km with at least 14,000km to go and passing through many time zones the battle group still lives on Moscow time. The Marines on board began an exercise at 0800 defending the ship as it passes through narrow straits like the Straits of Gibraltar which the Peter the Great will pass through at the end of the week when she receives new orders from the CinC Navy. Our Marines will be exercising not only in Venezuela, but also during a port call in Tripoli, Libya.

The exercises start by checking the cleanliness of weapons and assembling and disassembling weapons which they can do with their eyes closed. Everyone has their assignment on deck. They are armed with mortars (!), machine guns and grenade launchers.

(Practice firing with the target at 500m)

With 45 corridors totalling 20km, the Marines have to be in good shape.

Segment about a member of Nav Department celebrating his 30th birthday at sea.

Segment about the use of AFFF in fire fighting.
Posted by Russian Navy Blog at 5:13 PM 3 comments:

After having been burned last time, what can I definitely say about this video?

The pilot reports being "hot" (na boyevom) before rockets are apparently launched.

I think the bitching betty announces "limit of angle of attack" after pulling up.

The title of this video is "Employment of the Su-25 in South Ossetia". 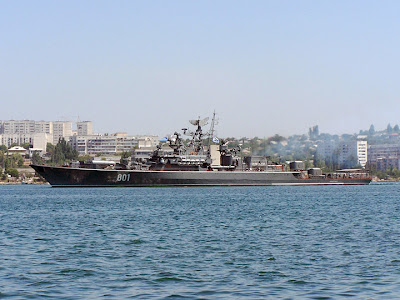 Last Sunday the SKR Ladnyy departed the main naval base in Sevastopol' and set course for the Black Sea straits. The ship under the command of K2R Aleksandr Shvarts has set sail for the area around the straits for the second time in a month. In August the Russian warship made a port visit to the Turkish Navy base at Akzas-Karaagach on the Mediterranean and afterwards carried out missions in the Black Sea.

In October the SKR Ladnyy will represent the Navy during the bilateral Russian-Italian exercise IONIEX-2008. These exercises have become tradition and are conducted by the two navies every other year.

The Russian ship will make visits to several Italian ports.

There is a Marine detachment on board the SKR. They will guard the ship during port visits. 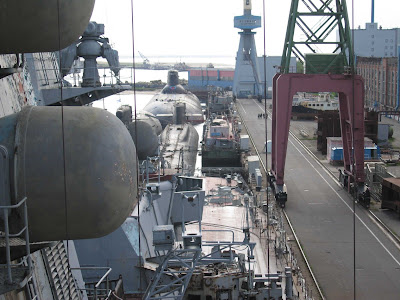 The unloading of spent nuclear fuel from the TAKR Admiral Nakhimov has begun. The defueling is proceding normally. Specialists from PO Sevmash and the crew of the cruiser are joined by representitives from Experimental Machine Construction Bureau Afrikantov and the crew of the specialized ship from the Belomorsk Naval Base.

The heavy nuclear missile cruiser Admiral Nakhimov arrived at Sevmash in 1999. However, the repairs that were planned for the ship were delayed due to lack of financing. All that time the crew and the shipyard kept the ship in good condition. In 2008 the work schedual was corrected and a chance to hurry up and do some work appeared.

Comment: Back in May, the project manager noted that they planned to "unload the active zone of the reactor" this year. I am not suprised that they defueled the Nakhimov.

I will be suprised if they actually refuel it though.
Posted by Russian Navy Blog at 5:42 PM 3 comments: 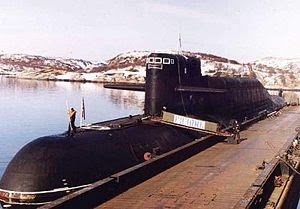 "At around 0400 Moscow time today after more than thirty days underway the SSBN Ryazan' moored at the pier at the Pacific Fleet submarine base at Vilyuchinsk (Kamchatka)", Dygalo announced.

"The crew of the submarine completed all missions during the deployment with honor and are doing okay", the PAO said.

The transit of the submarine was done under the command of K1R Igor' Stepanenko and the senior officer present afloat was the commander of Northern Fleet submarines K1R Aleksandr Moiseyev.

"Russian submariners didn't waste any opportunities during their long deployment and confirmed the quality of their skills by carrying out complicated tasks in Arctic latitudes", the Commander of the Russian Navy Admiral Vladimir Vysotskiy said, evaluating the results of the Arctic expedition.

"The role of the Navy in supporting economic activity on the world seas as well as in the Arctic is clearly rooted in the maritime doctrine of the state. The Navy is called upon to support the economic and research activities of the Russian Federation in the world oceans including in the Arctic."

The Zvezda TV report emphasizes that the boat went 30 days without surfacing and illustrates the route. The Ryazan' is noted as carrying the upgraded SS-N-23 Sineva. The Ryazan' has been permanently assigned to Vilyuchinsk and is expected to perform combat patrols on a regular basis, a change from the usual Russian practice of welding them to the pier.
Posted by Russian Navy Blog at 5:23 PM 3 comments:

Gist: NATO forces shadow Peter the Great and the Chabanenko from the sea and the air in the Norwegian Sea while the Russians conduct flight operations. Norwegian P-3 Orions circle the ships, obviously making observations as NATO will probably do every step of the way to Venezuela. The film crew observes as the P-3 drops sonobuoys in the water, listening for Russian submarines in the area and collecting data for analysis. The captain of the Peter the Great knew that the Norwegians were coming long before they got within visual range because of all the radar equipment mounted on the superstructure the size of a 17 story building. The navigator has more pressing concerns: avoiding bad weather on the way to Venezuela.

There are also a lot of contract sailors on board.

Toward the evening the sea state is five, which means waves up to seven meters. Flight ops were planned. Peter the Great is carrying two, one SAR bird and a second ASW helo. The fire fighters get on deck to erect the crash net so that the helo doesn't fall overboard. Flight ops are cancelled because of the winds and rain and put off until tomorrow.


Gist: Peter the Great conducts exercises under the watchful eye of NATO. Crew training is conducted every day on board the Peter the Great and the Admiral Chabanenko. Since the 63,000 horsepower engines of the Chabenenko aren't nuclear powered, she requires a lot of fuel. A Baltic Fleet tanker provides 70 tons of fuel per hour through a flexible hose while underway to the Chabenenko. The Yel'na also provides the Chabenenko with fresh water. The procedure takes seven hours while underway. Its just like in the air, differing in speed and scale. Navigators are careful so as not to cause a collision and spill even a drop of fuel into the water.

Sailors attend training below deck to learn Navy tradition and their rights. If sailors have any questions about their responsibilities or rights they can ask representitives of the military procurator's office or the Federal Security Service (FSB). Usually no one has any questions.

After training, some go off to an unexpected field day while others gather on deck - the Marines. They gather for training on repelling boarders while traversing a narrow strait.

29 Sep: Flight ops. Eavesdropping on a pre-flight briefing. Good flying weather is noted - sea state 2-3, wind 7 meters/sec (appx 14 kts). The crew chief says that the crew members wear special survival suits that will keep them warm and buoyent in the event of an accident. They put on two suits - the first is warm and hooks up to tubes on the helo to provide warmth. The second is orange and waterproof. A crew member demonstrates the inflatable "waterwings" he wears on his hips. The emergency heating system will keep a crew member warm in the water for up to an hour.

Everything is ready, permission is given for flight and a special elevator brings the helo up to the deck. There are two Ka-27s on board the Peter the Great, a SAR helo and an ASW helo. The reporter goes over the characteristics of the Ka-27 and names other country that flies this "most reliable helo of its class". Tonights task is to demonstrate mastery of night flying by flying over to and landing on the Chabanenko and returning. They do this a dozen times tonight while being watched by NATO ships and planes.
Posted by Russian Navy Blog at 5:48 PM 3 comments: