A pair of Tu-95 MSs take off for Vorkuta, where the notional enemy is located. On board the bombers are Kh-55 cruise missiles. Each aircraft can carry 16 of these missiles, but today each crew must destroy the enemy with one round.....

To make it more understandable how powerful these missiles are, they are equivalent to the destructive power of 4,000 rail cars loaded with high explosives, but in peace time, the crew practices with training rounds. The missiles can fly 3,000 km and to make the missile appear as small as possible to the enemy air defenses, the wings can fold in to the body of the missile like scissors. After the missile hits the target, this little piece of the missile is left with the number on it so that they can determine the accuracy of the strike.

The accuracy of the strike depends most of all on the navigator. For the navigator on today's flight, Vadim Viktrovich, this will be his first launch in twelve years of service in Long Range Aviation.


Vadim Kodrik: I can relax a little now. Of course, it was nice, especially at the moment everything went off. There was a little pressure. I was thinking about how to mark this occasion and so first a smoke break!

But the smoke break had to wait because of an aviation tradition.

In accordance with our traditions, in commemoration of the occasion I'd like to present him with this little bell.

The crew found out about the successful launch and mission graded "outstanding" on the way home and immediately after landing, a new red star appeared on the TU-shchik.  Each star marks the time the aircraft has made a direct hit on the target during firings.

Ah, I need a cigarette.
Posted by Russian Navy Blog at 5:02 PM 4 comments: 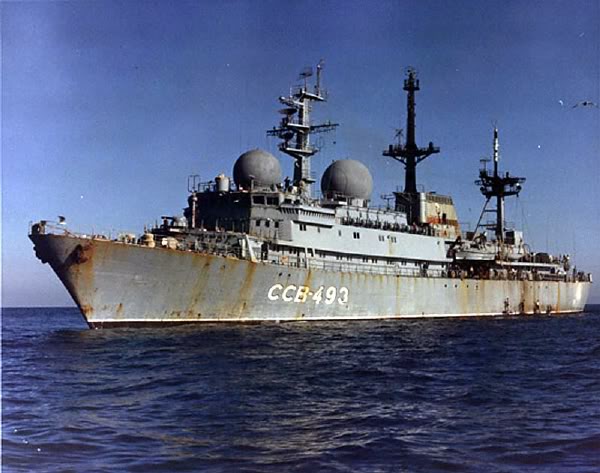 The Pacific Fleet large reconnaissance ship "Pribaltika" has suffered a casualty in the Korea Straits in the Sea of Japan.

A Pacific Fleet representative announced that the Pribaltika flooded through the kingston valve in the machinery room Sunday morning...."The large anti-submarine ship Admiral Vinogradov set sail from Vladivostok to the scene of the casualty...The crew is trying to restart the engine. There are no casualties", the source added.
Posted by Russian Navy Blog at 7:05 PM 2 comments: