Apparently, I can now engage in armed bank robbery at will

All I have to do is consult a lawyer first. If that lawyer gives me bad legal advice which causes me to commit all manner of sordid and horrible crimes, I'm covered, since "lawyers can make really really crazy arguments and still avoid professional sanction" and they can have honest disagreements on difficult matters of legal judgment without violating ethical standards.

Margolis' last point is especially important, since the former Vice-President of the United States is now going around the country telling people that he supports waterboarding and actively sought to use it when he was in office. Put differently, there is at least one member of the previous Administration walking around that is an admitted war criminal, although, to be sure, confessing to the elements of a war crime on television apparently does not, at least in this country, lead to any serious danger that one will actually be prosecuted for such crimes.

Whether or not the DOJ refers Yoo and Bybee for professional discipline, no one should think that either man behaved according to the high standards we should expect of government attorneys. They, and the government officials who worked with them, shamed this nation. They dragged America's reputation in the dirt. They severely damaged our good name in the eyes of the world. They undermined the values this country stands for and that the legal profession should stand for. Nothing the DOJ does now--or fails to do--will change that.

Rum, Sodomy and the Lash.

Its pretty disgraceful and historically ignorant to say that homosexuals can't be warriors (ever hear of the ancient Greeks?). And Tony Perkins, who never served a day in the military, lecturing people about "conditions in the barracks" is amusing.

But comparing honorably serving homosexuals to drug dealers and thieves is pretty despicable and an apology to gay servicemen and women is in order. But then, why should we give a shit about what some dude who retired from the Navy 25 years (or 125 years, I can't really tell) ago thinks about DADT? Consorting with bitter, primitive, hate-gnomes like Elaine Donnelly and Tony Perkins who want to bring a vision of a religious dictatorship to America doesn't do much for your cred.

For those who don't want to click through to the video, here is a rough transcript:

Like the time I took the ferry to Shelbyville. I needed a new heel for my shoe so I decided to go to Morganville, which is what they called Shelbyville in those days. So I tied an onion to my belt, which was the style at the time. Now to take the ferry cost a nickel, and in those days, nickels had pictures of bumblebees on them. Give me five bees for a quarter you'd say. Now where were we, oh ya. The important thing was that I had an onion on my belt, which was the style at the time. They didn't have white onions because if the war. The only thing you could get was those big yellow ones.

Even the Russians know they suck: Epilogue

After Australian aboriginal groups accused a Russian ice dancing pair of mocking aborigines, Valentin Piseev, president of the Russian Figure Skating Federation, suggested that they were the target of an international plot to force them to alter their performance.

“I think that this is a well-executed strategy directed against our athletes,” Mr. Piseev told Russian television from Vancouver.

Yes, Russia is victim of a conspiracy. Russia has often been the victim of international plots. Usually that plot is some sort of Jewish plot and not an Australian aboriginal plot, so for this routine they get a 10 for originality. 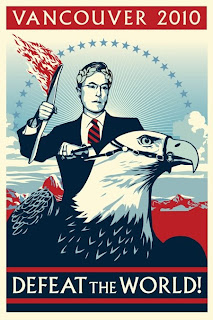 Rarely do Bulava launches achieve this...

When did moustaches go out of style in rock?

Photo: K-480 being rolled out of the building hall at SevMash, 16 April 1988. Source: military.tomsk.ru and TV program Udarnaya Sila


Arkhangel'sk - The efforts to extinguish a fire on a submarine awaiting disposal at the Zvezdochka Shipyard in Severodvinsk has been continuing for seven hours according to a source.

The fire on Akula class K-480 Ak Bars (Project 971) began at approximately 1445 Moscow time. "Cable raceways caught fire. Initial efforts to extinguish the fire were ineffective. The compartment is relatively big, but it almost immediately filled with smoke and visibility was practically zero. An attempt was made to flood the compartment in an attempt to extinguish the flames without effect".

K-480 is pretty young for being being a candidate for disposal (not that that is a BAD thing from my perspective!). For a taste of what disposal involves, see A Unique Operation in Gremikha.
Posted by Russian Navy Blog at 6:44 PM 3 comments:

Johnny, you are too bad.

One of these days, when the evil boys they come, where you gonna run to?

Posted by Russian Navy Blog at 8:00 AM 2 comments: