Russians to Base Major Forces in Syria? 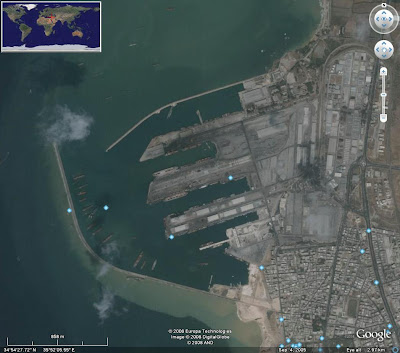 Sevastopol’ may be traded for the Syrian port of Tartus

The Commander in Chief of the Russian Navy, Vladimir Vysotskiy is planning to increase the number of combat ships in Sevastopol’. Also, without waiting for a political decision about the fate of the Black Sea Fleet (BSF), he is already thinking about re-basing the BSF in the Mediterranean basin after 2017. Military experts consider the idea of rebasing the fleet to be rational, but consider the announcement to increase the number of vessels to be nothing more than populism. Since Russia doesn’t have any ships to spare the only way to increase the numbers in the BSF would be to take ships from other fleets.

After the publication of Mayor Yuri Luzhkov’s doubts about Ukraine’s claim to Crimea, the dispute over basing the BSF in Sevastopol’ has broken out with new force. The President of Ukraine, Victor Yushenko quickly signed an order to end the fleet’s lease in 2017 and Russian officials have for the first time quietly raised the idea of paying more rent. At the end of the week the CinC Russian Navy Vladimir Vysotskiy announced that Russia would raise the number of ships in the BSF to one hundred. This number is predicated on a Russian-Ukrainian basing agreement since there are 35 ships in the BSF now. True, the CinC hasn’t said how this increase would come about. Experts think the CinC’s loud announcements are baseless. The President of the Academy of Geopolitical Problems Leonid Ivashov considers that Russia wont be able to put 100 ships into the Black Sea for another 20 years at the earliest, “since we simply don’t have them. But, by this time, we may already have lost the main base in Sevastopol’. Therefore similar pronouncements must be considered adventurism.” Aleksandr Khramchikhin, the chief of the information-analytical department of the Institute of Political and Military Analysis agrees that to do this obviously involves a transfer of ships from the Baltic and Northern Fleets. “But why we would do this is not completely clear," says the expert.

So with regards to possible new addresses for a renovated BSF, among the most probable appears to be the Mediterranean basin. “A Russian Naval Base can be built there,” Vladimir Vysotskiy announced, noting that “Russia has strategic interests in the world ocean and we will pursue them." Experts welcome the stationing of ships in the Mediterranean Sea. “But today we hardly have a toehold in that basin,” Leonid Ivashov says. “Really only the Syrian port of Tartus, where we can agree with the Syrians to use it. But it’s not as simple as to just pick up and move there since we only have a tender based there now. Redeploying to the Mediterranean partly makes sense, but even then there has to be some sort of presence in the Black Sea since we have to guard our own shores. Therefore light forces will probably stay in Novorossiysk and the heavier forces, which admittedly aren’t very numerous, will transfer to Tartus, where a Russian base will be constructed,” Aleksandr Khramchikhin says.

Since Soviet times there has been a navy repair base in the Syrian port of Tartus. Right now it is a temporary deployment base for the BSF (for about a dozen warships) and there are three floating docks and the repair tender PM-61. Russian specialists are also working on expansion of the port and the construction of a pier in the neighboring port of Al-Latakia. The repair base could potentially receive the designation of basing point and then Navy Base.

This momentousdecree wow gold came as a great beacon gold in wow light of hope buy wow gold to millions of negroslaves wow gold kaufen who had been seared in the flames of withering injustice.maplestory mesos it came as a joyous daybreak to end the long night ofcaptivity.but one hundred years later,maplestory money we must face the tragic fact thatthe negro is still not free.maple money one hundred years later,sell wow gold the lifeof the negro is still sadly crippled by the manacles ofsegregation and the chains of discrimination. one hundred yearslater,maple story money the negro lives on a lonely island of poverty in themidst of a vast ocean of material prosperity.wow powerleveling one hundred yearslater,maple story power leveling the negro is still languishing in the corners of americansociety and finds himself an exile in his own land. so we havecome here today to dramatize wow powerleveln an appalling condition.in a ms mesos sense we have come to our nation''s capital to cash a check.when the architects of our republic wow powerleveln wrote the magnificent wordsof the constitution and the declaration of independence, theywere signing a promissory note maplestory power leveling to which every american was tofall heir. this note was a promise that all men would beguarranteed the inalienable rights of life, liberty, and thepursuit of happiness.it is obvious today that america has defaulted on thispromissory note insofar as her citizens of color are concerned.instead of honoring this sacred obligation, america has giventhe negro people a bad check which has come back markedinsufficient funds.justice is bankrupt. we refuse to believe that there areinsufficient funds in the great vaults of opportunity of thisnation. so we have come to cash this check -- a check that willgive us upon demand the riches of freedom and the security ofjustice. we have also come to this hallowed spot to remindamerica of the fierce urgency of now

sneakers shoes She continued,
"Why...? Don't you need someone to pose as your girlfriend this year?" Then he answered, "No, there is no need for that anymore......"
Before he can continue, he was interrupted, discount nike shoes"Oh yes! Must have found a girlfriend! nike shox r4 You haven't been searching for one for the past years, right?" The man looked up, as if he has struck gold, his face beamed and looked directly at the drunken girl. tn dollarHe replied, "Yes......you are right! I haven't been looking for anyone for the past years."
With that, the man darted across the floor and out the door, cheap nike shoesleaving the lady in much bewilderment. He finally realized that he has already found his dream girl, and she was.....the Vancouver girl all along! The drunken lady has said something that awoken him.
All along he has found his girl.nike tennis shoes That was why he did not bother to look further when he realized she was not coming back. It was not any specific girl he was seeking! cheap nike shoxIt was perfection that he wanted, and yes.....perfection!!
Relationship is something both parties should work on. Realizing that he had let away someone so important in his life, he decided to call her immediately. His whole mind was flooded with fear.free shipping shoes He was afraid that she might have found someone new or no longer had the same feelings anymore..... For once, he felt the fear of losing someone.
As it was Christmas eve, the line was quite hard to get through, especially an overseas call. He tried again and again, never giving up. Finally, he got through......precisely at 1200 midnight. He confessed his love for her and the girl was moved to tears. nike shoes It seemed that she never got over him! Even after so long, she was still waiting for him, never giving up.
He was so excited to meet her and to begin his new chapter of their lives. He decided to fly to Vancouver to join her. It was the happiest time of their lives! nike discount shoes But their happy time was short-lived. Two days before he was supposed to fly to Vancouver,cheap puma shoes he received a call from her father. She had a head-on car collision with a drunken driver. nike shox shoes She passed away after 6 hours in a coma.
The guy was devastated, as it was a complete loss. Why did fate played such cruel games with him? He cursed the heaven for taking her away from him, denying even one last look at her! How cruel he cursed! How he damned the Gods...!!nike free shoes How he hated himself....for taking so long to realize his mistake!! That was in 1996.
The moral of this story is :
Treasure what you have...
Time is too slow for those who wait;
Too swift for those who fear;
Too long for those who grief;
Too short for those who rejoice;
But for those who love...
Time is Eternity.
For all you out there with someone special in your heart, cherish that person, cherish every moment that you spend together that special someone, for in life, anything can happen anytime. buy shoes onlineYou may painfully regret, only to realise that it is too late.

It is extremely interesting for me to read this post. Thanks for it. I like such themes and everything connected to this matter. I definitely want to read a bit more on that blog soon.

Can anyone recommend the top Software Deployment utility for a small IT service company like mine? Does anyone use Kaseya.com or GFI.com? How do they compare to these guys I found recently: N-able N-central remote pc control
? What is your best take in cost vs performance among those three? I need a good advice please... Thanks in advance!

BTW, use GPS jammer to disable all secret transmitters in your room or at work.

thanks for your sharing! great helpful!!!Thank you

wedding jackets for the bride

silence. I'm the only person who heard one's heart beat.

The christian louboutin store was designed for the ladies. Since the pumps was born, the ladies life become colorful. The christian louboutin evening pumps are the god's masterwork. Who invited thechristian louboutin pumps? Seldom people knew, but I think every lady would be grateful for him. Among the countless pumps, the christian louboutin peep toe is the most outstanding ones. The elegant pattern, the delicate style all mold the ladies perfect leg profile. Flowers in the spring of 2011 creeping, up from hair to clothes continue to footwear, have had a brilliant up. In such a glamor, spring and summer flowers now here. Romance is a woman's mood, exquisite flowers just right of expression in our gestures, the woman, how can we not love the romantic temperament so that they distributed the flowers do? 2011 flowers bloom will enjoy different poses! The Christian Louboutin 2011 Sandals also can adds the hright of the ladies, it bring surprise to the short lady. Especially the red sole of the louboutin heels, magic and sexy, many ladies are crazy. The red sole, the first feature of the Christian Louboutin stroe.

Christian Louboutin Outlet Online shoe store is up for many years.A man who wants to play its expertise, it must fit the social environment needs. If you need from the social environment, their expertise will lose value. Therefore, we have according to community needs, determine their own actions, better to show themselves. Christian Louboutin Outlet Online shoes wear can make you look more beautiful, more attractive feet.