Death of a Super Spy 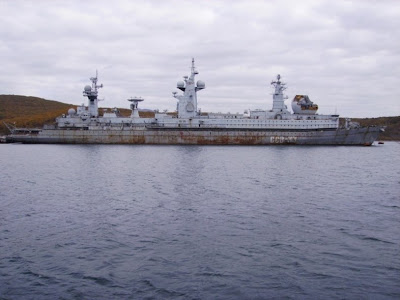 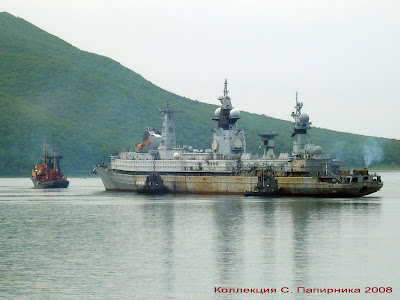 The unique nuclear powered Ural rusts away after 25 years of disuse.


The Project 1941 nuclear powered reconnaissance ship Ural is moored to one of the piers in the Far East with a five degree list. There aren't enough specialists on board to maintain her nuclear reactor. There used to be a thousand strong crew and now there are barely one hundred. The main systems on board the giant ship haven't functioned for a long time and to rehab the ship would cost an enormous amount of money.

At the beginning of the 90s the reconnaissance ship Ural was a secret vessel. The hull and the reactor of the Ural were similar to the Project 1144 Orlan class cruisers (Kirov class). But the electonics and the combat missions of the ship were extremely secret.

The Ural wasn't built for combat and could only repel cutters, small ships and helicopters. It had two quick firing 76mm AK-176 gun mounts, four 30mm AK-630 gun mounts, four Igla missile mounts and four Utes-M 12mm dual machine gun mounts. But there is electronic weaponry to detect aerial, surface and subsurface targets, direct fire and also several special radars and supporting systems known as the Korall system, designed to locate and track missiles and track satellites and other objects in orbit that are of particular interest.

The Ural could loiter for an unlimited amount of time in neutral waters without refueling in the American littoral and analyze the electromagnetic spectrum around American ICBM and Strategic Aviation bases. She is equipped to quickly evaluate an enormous amount of reconnaissance data and transmit it to the national command authority. It makes sense that such a ship, which can carry out electronic reconnaissance from the the open ocean as well as from the pier at her home base, has obviously not dealt with hidden and open enemies or with emeging parters of Russia. But even today, 25 years after being laid down, it is very difficult to find reliable information about her construction.

The Spy on the Baltic Wharf
Back in 1977 the Military-Industrial Commission of the Communist Party Central Committee together with the USSR Ministry of Defense decided to construct a large, nuclear powered reconnaissance ship Ural with a length of 265 meters and width of 30 meters. The Ajsberg Construction Bureau was the prime contractor. The ship was laid down in June, 1981, launched in 1983 and accepted into service in 1988 or 1989. Designed for electronic warfare, she was equipped with several ES-1046 and El'brus computer systems in order to crunch massive amounts of collected data. With the help of the Korall system, the spy could track the trajectories of ballistic missiles, manned space systems and pass on that data.

Testing of all the systems began in the Baltic Sea in 1988. A huge scientific research organization was created in support of this testing. This was a huge scientific collective which practically never left the ship during the construction, shipyard and sea trials period of development.

The State acceptance act was signed in 1989 and the ship began her transit to her assigned port of Vladivostok. Complex brigades of specialists were embarked to work out all the possible kinks during the transit. Vladimir Anikeyev lead the scientists who worked on the two El'brus computer systems. The computer systems never wanted to work correctly and were very capricious. Anikeyev was in the tropical sun for the first time and watched from the deck as Singapore passed abeam of the ship. He spent practically all of his time in the bowels of the ship, bringing the computers on line so that they could analyze and use data in real time. Finally after 59 days at sea, the handsome Ural pulled into Strelok Bay in Vladivostok. There wasn't a pier ready for her and she was forced to anchor out in the bay and begin her invisible battle with corrosion and failing machinery, which had to remain running while at anchor to support the systems that supported the huge crew.

The crew of Ural immediately began to prepare for combat operations around one of the American test ranges testing anti-missile defense. Meanwhile, a lot of things were going wrong aboard the newly constructed ship that even the Baltic Fleet specialists couldn't deal with, such as problems with the reactor cooling system. Now there was no talk of a combat deployment. The unique Korall surveillance system and El'brus computer system didn't want to work. There was nothing fleet specialists could do about them either.

As a result, the first rank ship, which should have become the flagship of the Far Eastern Fleet, became a floating barracks for young or prospectless officers. She never went to sea and her powerful radioelectronic complement, into which was poured and enormous amount of valuable metal, gradually began to decay. Officers sent to crew the ship requested transfer or release from duty after a year or a year and a half of prospectless service on board. There were occasions when the command didn't satisfy such requests and the officers jumped overboard and swam for shore. After several such protests, the command decided not to block requests for transfers from Ural.

Suggestions were advanced to use Ural as a floating nuclear power plant or even sell her abroad for scrap. But nothing came of these suggestions because Russian nuclear secrets needed to be kept. For now the ship is in limbo. No suggestions have been made by fleet command to do anything with her. It is preferred to just not talk about her openly. Only the former Navy Chief of Staff Fleet Admiral Vladimir Khmel'nov has mentioned her in his chronicle of the Russian Navy, "Russian Fleet: Prowess and Poverty", pulling back the curtain on the fate of the giant ship. "On board the Ural, each reactor is served by two people when there should be six".

There are less than a hundred crewmen out of a thousand still serving aboard the Ural, out of them 25 seamen. The cooling system doesn't work and only one pump heroically pumps water out of the huge bilges. Word around the fleet is that the ship will be sold overseas after removal of the nuclear reactors.

A few years ago, there was some preservation work done on the hull at the ship yard. Meanwhile specialists couldn't correct the five degree list. Afterwards, the nuclear spy was welded to the pier, where she awaits her fate. 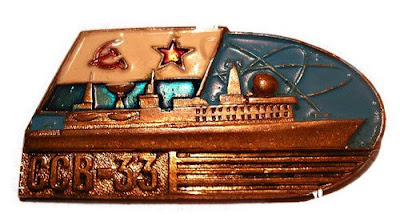 - Ural is one of those rare ships free of rats - while the reconnaissance equipment is working all the rats died and only reappeared when the ship moored at the pier.

- When the Ural was in port Cam Ran Bay, Vietnam, the roving patrol employed their weapons (special grenades) against an unknown target in the water near the ship. It turned out to be a large turtle.

- The ship was only 1.5-2km from the site of a memorable fire at the main Pacific Fleet ammunition storage depot. Despite the huge number of shells and missiles flying through the air in different directions, thanks to the efforts of K1R Keshkov and the crew, not one shell, rocket or fragment fell on the ship. Under a hail of fire, the crew, at night, with only the help of one tug and her own power, moved the ship to a safe place.

- A box of 76mm ammunition disappeared during an on load. The commmander of the ship Keshikov asked the crew to return the ammunition anonymously, no questions asked. All the shells were returned that day and Keshikov personally thanked the crew over the 1MC for every shell brought to his stateroom.

- In the fall of 1991 during a powerful storm, the ship broke loose from her mooring and drifted out to sea. She passed within a few hundred meters of the rocky shores of Putyatin Island. The next day the crew got deployment rations (like sausage and condensed milk) since formally the ship was out of home port.
Posted by Russian Navy Blog at 8:28 PM

The marketplace is Oakley Sunglasses On Sale flooded with manufacturer for artist Oakley sunglasses for equally males Oakley sunglasses and ladies dfgkcxy0rtw Oakley sunglasses. The amounts are seemingly unending. as well as in that checklist your vendor of option can be there. Oakley Sunglasses For Sale The model continues to be traditional however continuously on craze along with the series of Oakley sunglasses involves an excellent choice of oversized, wraparound styles, aviators, and shields or visor styles, all total using the popular Oakley logo.Anyway, Id say the elegance and style flavor of style Oakley Radar defy explanation along with the style Oakley sunglasses hierarch undoubtedly contributes to offering an borders for the wearers attractiveness and glamour and accordingly lead to their stealing the limelight. Oakley Gascan Sunglasses Cheap But in the function you decide on Oakley, then you definitely is often certain with the best. it's correct that Oakley Jawbones are higher finish goods and thus rather high priced but it is feasible to stay apart from using up holes within your pocket on the pair.