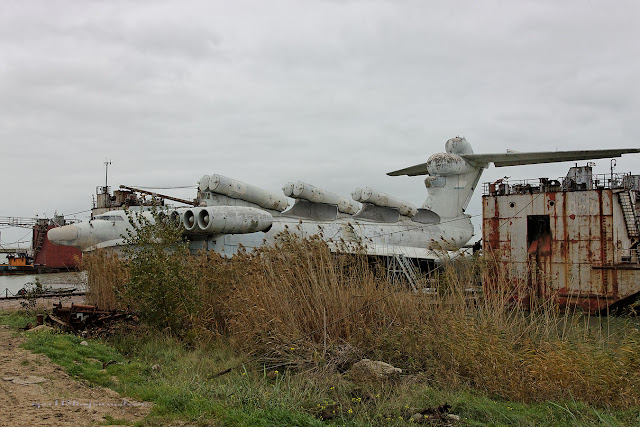 Livejournalist igor113 has an excellent series of photos of the weird and wonderful Caspian Sea Monster.

There are photos of the flight deck (bridge? flight deck? I have no idea what to call it!), the crew quarters (the ekranoplan could stay at sea for five days), the galley, the anchor room, the forward most radome in the nose, the flight engineer control panel, some sort of damage control panel, the "engine room" and the weapons control station under the first pair of SS-N-22 tubes. The beast is truly the weird offspring of a 747 and a missile corvette; parts of it are genuinely airplane like and parts of it are genuinely ship like.  Igor climbs the tower to the tail gunner's station up on the vertical stabilizer and I am stunned by the good material condition that the area is in. In fact, the entire interior looks pretty good, good enough that it looks like with a little rehab and paint, it could be restored to operational condition pretty quickly.

This is definitely not the Caspian Sea Monster but the Lun class ekranoplan. The two have a similar engine layout but that is it.

Hi there fellas. nice site. I am having research right now to complete my dessertation.
Thank you for the wonderful topic you got there.

I found this blog very informative.

I liked this post very much as it has helped me a lot in my research and is quite interesting as well. Thank you for sharing this information with us.

Essay On Purpose In Life

As a girl, I don't know what Hermes Birkin I want. In my heart,you will say I know hermes bags very well. She wants flowers,xndszmba beautiful clothes,and fashionable. You can buy hermes birkin when you will participate a party or a ceremony.she also is a fun of hermes belts .up can not have a happy family.You know everyone wants to have a hermes purses . Where you can relax yourself and reflesh yourself.Maybe, you will say hermes birkin bags for sale are too expensive to buy. no one ever knows we want hermes wallets in our deep hearts. If so,Birkin bag is the classical style of hermes birkin handbag and is named after Jane Birkin,She has more than eight hundred hermes ties .of course,Both of Paris Hilton and Caroline Mulberry are her schoolfellow.