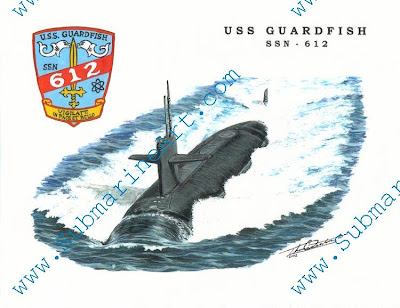 There are exceptions. There is a little bit of operational detail of one particularly tense, wartime operation at Guardfish.org, a website dedicated to the men who have served on board the USS Guardfish (SSN 612). Entitled The Saga of the 1972 Guardfish Patrol, it is a little bit of Commander David Minton's account of operations by the USS Guardfish that ranged from the Sea of Japan to the South China Sea in the late spring of 1972.

There are always men on the eyepiece of the other periscope and their stories (in English) are even rarer. In what may be a unique instance, we have the memories of two Cold War submarine captains on opposite sides of the periscope participating in the same events. Commander Minton has his story, as does Admiral Al'fred Simenovich Berzin, who as a Captain First Rank (K1R) commanded Echo II class SSGN K-184, the Guardfish's target, in 1972 during its transit to Vietnam in response to the failure of the Paris Peace Talks.

Not long ago, someone gave me a book, “United States Submarines”, in which I read an article by retired Navy Captain David Minton called “The Guardfish Trails an Echo”. I immediately understood that David Minton trailed the K-184, which I commanded at the time. I will tell you about this event from my side, paying attention to David Minton’s commentary.

While serving in the position of commander of the SSGN K-184 in the Pacific, I had to participate in reconnaissance operations against the strike carrier America, the anti-submarine carrier Ticonderoga and the submarine Guardfish. The experience received benefited me in my further service. During my education at the naval institue, at the post-graduate courses and at the Naval Academy, an officer had to receive a deep understanding of how to conduct reconnaissance, have a practical mastery of reconnaissance assets, know how to analyze information obtained about the enemy and make corresponding conclusions which is necessary to make a decision about employment of torpedoes or missiles or to decline (break off) from the anti-submarine warfare forces of the enemy. This learning process must continue even in the fleet, that is, it a constant process. For any submarine commander in peace time, the opportunity must present itself to get experience conducting a reconnaissance operation against surface and subsurface vessels of the probable enemy. Our commander must completely know the following facts about the submarine of the probable adversary:

The submarine I commanded, K-184 was already on combat duty for a month in Bukhta Pavlovskaya on the 9th of May, 1972. That morning the whole division mustered on the parade ground, the division commander Contra-Admiral I.I. Vereniki greeted us and congratulated the whole crew on Victory Day and afterwards we marched past the division commander's reviewing stand. After that I went to the duty officer and read the intelligence summary:
“The area of the Indo-China Peninsula. Combat action against the patriotic forces of Indo-China from the Tonkin Gulf (130 miles to the north of Da Nang) carried out by the strike carriers Coral Sea, Kitty Hawk and Saratoga; and from an area 170 miles to the south east of Saigon the strike carrier Constellation with 38 ships in support. The carriers have launched 353 sorties, 256 of them strike sorties.”
In the second half of the day the Pacific Fleet went to a higher state of readiness and our submarines sounded general quarters, while the alarm was sounded on our boat and the crew responded, the crew on the boat was ordered not to fire up the main reactor. That evening the division commander Contra-Admiral I.I. Vereniki called me to his office and said succinctly, “Go to the South China Sea and support our Vietnamese brothers.” I also found out from him that behind us were going Echo I SSGN K-45 (Captain First Rank Yu.N.Ganzha, commanding) and Echo II SSGN K-57 (Captain First Rank Yu.F.Shipovnikov, commanding).

10 May. By morning both reactors were brought on line to the turbo-generators. The combat orders came in the form of a telegram, which was given to me along with the route charts by the Division Chief of Staff, Captain First Rank M.B.Abramov. I received my final instructions from the division commander and then we slipped away from the pier and got underway.

David Minton writes: In the summer of 1972, the USS Guardfish (SSN 612) was in the Sea of Japan when world events pushed her and her crew into participating in a key event. With the collapse of the Paris peace talks, the war in Vietnam took a more forceful turn on the 9th of May and our troops began to mine Haiphong and other important North Vietnamese ports in order to cut the North Vietnamese Army (NVA) off from sea resupply. A message came to the Guardfish warning of operations at sea on the part of the Soviets in response. The world situation was white hot. No one knew how the Soviet Union would react to the mining. The Guardfish took a position near the Soviet Pacific Fleet's largest base at periscope depth. Later that night on the 10th of May, a submarine was sighted visually, intersecting our course at a high speed and heading straight for the Guardfish, which was expecting her. Closer contact allowed us to visually identify the maneuvering black mass as a Soviet Echo II class SSGN. This SSGN, which displaced 5000 tons, was equipped with a nuclear reactor and carried eight surface to surface Shaddock cruise missiles which could destroy targets at a range of 200 miles. The Guardfish followed behind her. Soon the Echo II submerged and took a course to the south-east at high speed. Was this sortie the answer to the mining of Haiphong harbor?(/i)

thanks for your sharing! great helpful!!!Thank you

wedding jackets for the bride