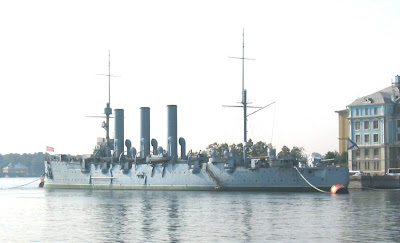 What next from the AP? The Constitution making a port call in Batumi?

Poti's port reportedly suffered heavy damage from the Russian military. In addition, Russian troops have established checkpoints on the northern approach to the city, and a U.S. ship docking there could have been seen as a direct challenge.

Meanwhile, the Russian missile cruiser Aurora and two missile boats anchored at the port of Sukhumi, the capital of Abkhazia, some 300 kilometers north of Batumi. The Russian Navy says the ships will be involved in peacekeeping operations.

Posted by Russian Navy Blog at 9:11 AM

I think our plan is to send the dreadnought Texas (BB-35) to deal with this escalation.