Inside the Sevastopol' Anti-American Protests 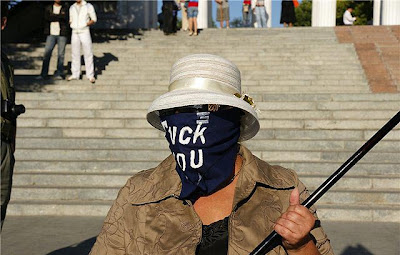 The crew of the American warship "Dallas" couldn't walk around Sevastopol'. A group of activists from the internet forum sevastopol.info conducted psychological warfare against the NATO sailors.

As a participant in the forum by the nickname LenaDonbass told "Novyy Region", residents of Sevastopol' didn't want to let the crew of the American ship ashore. But the police convinced the picketers to temporarily relent since allegedly the sailors would only go ashore no earlier than five in the evening.

"People left and only then the Americans appeared", Elena said. "When they departed, we formed a human chain to block them. But they charged through like bulls, 30 or 35 guys, in an organized group, but in civilian clothes."

The Americans pressed part of the picket line into a barbed wire fence. Many were scratched bloody.

"Naturally, after this we were very angry, running after them through the city, not allowing them to photograph anything and warning merchants in stores that they were the crew of the Dallas", Elena said...

"When we said that these are the Americans that delivered weapons to Georgia, people reacted very aggressively. Guys went up to them and asked us to leave so they could kick some American ass. But we tried to head off illegal action. There are already a lot of charges against activists by the police", Elena explained.

In her opinion, thanks to the escort by forum activists they succeeded in avoiding a massive confrontation with the civilian population.

"There were a few confrontations, but we tried to not allow serious incidents and tried to not let any repeat themselves. Return to your ship, you aren't welcome here", Elena said.

Some American military guys decided to buy some ice cream on Nakhimov Square. But forum activists asked the girl not to sell them any.

"We went up to her and asked her not to sell the Americans ice cream, that they are killers who brought weapons to Georgia. She thanked us for the warning. Sailors went up to her and we told them that she didn't speak English and wouldn't sell them ice cream. They answered that everyone speaks the language of money. The girl knitted her eyebrows and turned away from them, confusing the Americans."


According to Elena, the forum activists were able to drive two groups of sailors back to the ship.

"The police began to curse us, saying that we were creating a circus. We began to curse them back and that they were carrying out an illegal order and provoking a clash between the peaceful population and the military yet again, only this time, with the American military", Elena emphasized.

She added that the activists were planning to report the actions of the police to the authorities.

"Its not the first time that the police provoked a clash. The Ukrainian military police hasn't stopped criminal activity so it was up to regular people to do it. As far as the Americans go - they protected them, and when nationalists come into town, they protect them, too," - according to indignant forum dwellers.

Remember that the Coast Guard ship Dallas pulled into port on 01 September at the invitation of the Ukrainians while it was on its way from Georgia. The next morning she was gone.

Next time, I hope an amphib pulls in with a Battalion Landing Team embarked and there is a no curfew liberty call and no shore patrol.

Those folks at sevastopol.info are a supremely classy bunch. Here is what one extremely active (12,000+ posts) member is encouraging other "activists" to send to the Mount Whitney on the occasion of her arrival in Poti:

We hate all of you and we would start killing you in Sevastopol soon!

Likening us to animals? Check

"stay classy, Russia"? So people in Sevastopol are Russians? I was under the impression that Sevastopol is in the Ukraine? Or is it Russian now? I think youre confused. What you meant to say is "stay classy, Ukraine". You're confusing the fact that almost everybody in the Eastern part of the Ukraine is fundamentally against NATO, with it somehow being Russia's fault. Or do you blame the attitude of the Eastern Ukrainians on Russia?
My point is, get a clue.

And his point, Oleg, was that most of the people who take time out of their days to ruin liberty for some coasties who are just trying to get some time ashore are Russians, even though they live in Ukraine. He has a clue, trust me. I'm surprised you didn't make that connection, since it's been mentioned on this blog and others several times.

They were waiving quite a few Russian flags...looks to me like they were Russians..But whatever i guess if you are in a country there is nothing but natives of that country living there..

Why cant they have been Ukrainians? I think its a little unfair to assume that these people are automatically Russian just because they dislike the American presence in Sevastopol. It just seems to me there is a tendency to jump to a conclusion that if somebody is against NATO/America/Georgia they must be Russian. Lets completely ignore the fact that many many Ukrainians are pro-Russian, against NATO, but are not themselves Russian.

Though managing to refrain from likening Russians to animals does score slightly ahead of the prolific poster at sevastopol.info, stereotyped racism and inciting violence appears to be just as popular! Stay classy, Russian Navy Blog (and well away from Crimean politics)!

It's a shame that these people made a choice to handle this in such a primitive manner. They took their frustrations with US-Russia politics on a bunch of coasties, who had no personal connection to anything they were frustrated about.

They are ethnic russians, and as a Russian-American I am thoroughly ashamed for their behavior. I hope that the coasties don't take it to heart.

Yep, let's send a Seal team out for Ice Cream and Ruskie poon!

thanks for the information on this blog! I find it very interesting and entertaining! hopefully soon have updates that I love your post! I thank you too!
buy viagra
viagra online
generic viagra

HI friends, this information is very interesting, I would like read more information about this topic, thanks for sharing. homes for sale in costa rica

Hello .. firstly I would like to send greetings to all readers. After this, I recognize the content so interesting about this article. For me personally I liked all the information. I would like to know of cases like this more often. In my personal experience I might mention a book called Generic Viagra in this book that I mentioned have very interesting topics, and also you have much to do with the main theme of this article.

Very good afternoon to everyone! My name is Richard, I would like to express my joy to have read this fabulous article, I think it's spectacular, it contains what is necessary to keep the reader entertained!
Generic Viagra