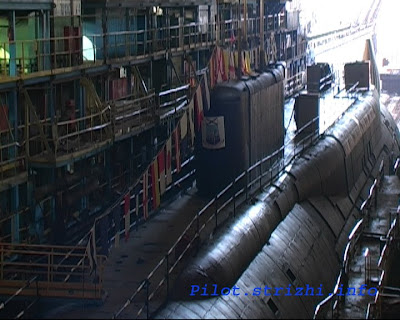 In the near future, the SSBN Yuri Dolgoruki will conduct sea trials in the test range in the White Sea. According to a 04 Sep story by Interfax, the preparations to go to sea are being done jointly with the crew and specialists from OAO Sevmash.

The testing will include checks of the power plant and combat systems. The exact date the boat will go to sea hasn't been announced.

The Yuri Dolgoruki is the lead in the Borey-class/Project 955 strategic missile cruiser. She was launched in April, 2007 and it is expected to be commissioned later this year. Sevmash is currently constructing two more of the class - the Alexandr Nevskiy and the Vladimir Monomakh.

The Yuri Dolgoruki displaces 24,000 tons. The maximum speed is 29 knots. She is armed with six 650mm torpedo tubes, four 533mm torpedo tubes and 16 ballistic missile launchers for the Bulava.

My bet is she goes to sea unarmed. And if she does go to sea with something in the tubes, it will be with ballast cans or a half tested, unreliable Bulava system so that the Russians can claim the usual bullshit about how their systems are "the best in the world with no analogue".
Posted by Russian Navy Blog at 7:07 PM

Is there a good photo that would allow counting the actual number of launch tubes? Is it 12 or 16?

No, I haven't seen one mostly because all the pics of the Dolgoruki I've seen have all been in the building hall.

I'm confused a little about the number of launchers myself.

Here is a link to more pictures:

The missile compartment seems a little short to me, but its hard to tell.

Thank you. I hope we'll get a good look at it once it goes to sea.

Yuri may carry the Sineva SLBM, the new Bulava SLBM is not operational.