Comparison of Forces in the Black Sea 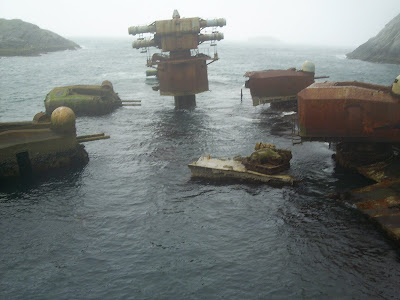 
A long, boring article comparing the naval forces available to Russia and Ukraine and her allies (NATO), including Bulgaria, Rumania and Turkey. Mostly it is a rundown of the current availability of naval forces in the Black Sea, their capabilities and the note that Bulgaria, Turkey and Rumania aren't really constrained by the Montreux Convention limiting tonnage in the Black Sea.

The money paragraph comes at the very end:

It's abundantly clear that in general, the Russian Black Sea Fleet and Groups of Forces in this region is weak. In the big picture, we continue to lose our position in the Black Sea basin. And it would behoove the military-political leadership to immediately pay attention to this weakness.

This is an admission of insecurity and weakness. I think history has shown that a Russia that feels weak and insecure is a dangerous Russia.
Posted by Russian Navy Blog at 9:00 PM

The people of Bulgaria is against the puppet, very corrupted and pro-American government! We do not want to fight against Russia! Russia was created by Bulgarians! The USA should not intervene in Eurasia!

Bulgarian elephants are the best friends of soviet elephants!

That was "younger brothers of soviet elefants" Haha...

Nice story you got here. I'd like to read a bit more about that matter.
BTW look at the design I've made myself High class escorts

It was rather interesting for me to read this article. Thanks for it. I like such themes and everything connected to them. I definitely want to read more soon.

Pretty cool blog you've got here. Thanks the author for it. I like such themes and everything that is connected to this matter. I would like to read more soon.